I grew up on a dairy farm in New Hampshire and behind the house was a gnarly evergreen that we could see from the kitchen windows where our table was. Early on I remember the tree was known as the Mother Nature tree. I can’t know how the story was created but surely it was one of us kids that asked some question about it which then prompted a story and her name. 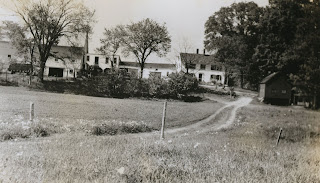 Mother Nature was a daily topic on the farm as it affected everything whether it was to dry, too rainy, too windy, too cold. The farm had a few wells we used for the house and barn. I remember summers when my father would be down our wells piching sand up out of the well to try to get more water. The wells were shallow dug and had a ladder in them down the side. At the bottom I could see fine sand when they were dry. I couldn’t help my father so I would just kneel at the edge of the well opening and watch him down there sweating and trying to muster moisture for the cows. Today I see that vision from his perspective and only can imagine the discouragement he felt.

I remember Dad trekking through feet of snow with a ladder over his shoulder to get snow off the roof of the four square colonial. And thunderstorms that rushed in so fast and furious there was barely time to get off the tractor and under cover. They were big and scary, shaking the house and rattling the windows. Many springs the banks of the Souhegan River, which our farm bordered for pasture after pasture, overflowed and flooded our fields for a week or more. Our house and barn sat on a knoll and all around us the fields were transformed by the swollen river. That was scary to me as a little kid.

This summer Mother Nature has imposed herself upon us in a very clear way. Rain. It has been raining for 6 weeks, nearly every day. With each passing storm I think, could it rain harder? And it does. Yesterday our temperatures and humidity were poised for a rough storm late day. I was in Keene wrapping up work and then grocery shopping but knew the storm was imminent. The sheep were on pasture but the plan was to get them to the winter barn as we were apt to get 2-5 inches of rainfall on an already soggy ground, plus damaging winds. So I hustled through the grocery store and it just started to sprinkle by the time I got in the truck. I got home to a gentle rain and thought, not too bad. But then I heard a rumble of thunder that shook the house and said…better move the sheep now!

No sooner had I gotten the winter barn ready and driven the flock down but the skies opened, the thunder rolled and the wind blew. Rain! Like a dam had burst wide open. Instinctively the flock went out into the pasture under the big apple tree thinking they needed shelter then they realized the barn was a better option for sure and all roared back in to their great big safe barn. It poured most of the night.

This morning we are one wet, soggy mess. Because of the humidity and the rain and the manure I felt the flock needed to be moved for the day out to pasture despite the sogginess everywhere. I have 4 options for moving them and none were in great shape. The ground is so over-saturated that water is atop the grass in places. I put them in a pasture that is soggy but manageable for today. I gave them a good round of hay fro breakfast and cleaned their barn up for tonight.

It is now a daily challenge here to make it work for them. We will face hoof problems unless we take measures now to ward them off. We’ll spend a half day this weekend trimming all the hooves and then dosing their feet with some protective medicine to ward off laminitis. It is just the nature of a wet summer for them. If we do nothing foot scald will occur. And as for winter hay, we now are in trouble. We have 250 bales in the barn and only half way done. No one can make hay in the New England states as we are all in the same boat.

As we face one set of circumstances other regions are too dry. Texas is in real danger now. The Southeast and the Northwest have record heat and no rainfall. There are wretched storms racing across the middle of the country over and over. No one is getting off easy with Mother Nature right now.

What challenges has Mother Nature imposed on you this summer? Has she affected your life at all?