Many moons ago and I mean MANY moons, we owned two beautiful Oxford ewes pictured below. They were our first sheep that we bought in 2000. I was soooo excited and boy did we spoil these girls. Pearl (left) was named after my maternal grandmother and Viola (right) for Jack’s childhood family nanny. 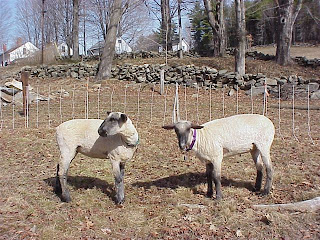 Here they are running out from the barn to the hay feeder, about 4 months old and feeling good! 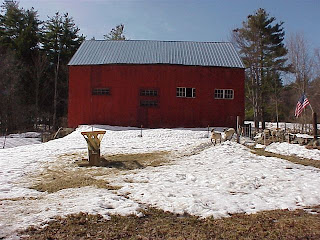 Oxford wool is great for outerwear, blankets and socks. And at the time I didn’t even know how to knit, I just had to have some sheep.

So I sent the raw wool off the following spring to a mill to be spun to yarn and a few blankets. I knew nothing about good mills from bad mills and this was not a good experience. The yarn came back single spun with massive amounts of slubs (for you non-fiber people that means areas of the yarn that are unspun). But when I say slubby this was awful. I couldn’t market it at all. So I kept it for us to knit up. It would make fine barn sweaters and heavy socks.

In 2002 we sold Pearl and Viola to an farm that raised Oxfords so we could make room for the beginning of our CVM/Romeldale flock. Secretly we have felt badly ever since as they didn’t get the life we had hoped. I know Viola has since died and I suspect Pearl has also. In the summer of 2004 I decided to knit a pair of socks for Jack from their yarn as I reminisced about them. But I also wanted to try my hand at dyeing and so I used some synthetic dyes to paint the yarn. It was so exciting, having never dyed before. And then I began knitting the socks in the fall of 2004.

This project fell off the face of the FO list when I realized I didn’t have enough yarn to finish them and also the first sock came out too short for Jack’s measurement. I stashed the project, fell in love with natural dyeing and never looked back. I’d pull the project out of the UFO drawer look at it, sigh and close the drawer.

But then whilst in the middle of my block a few weeks ago, I decided “I can do this!” So I dyed (with the synthetic dyes) another skein of yarn, tore out the finished sock back to before the toe decrease, remeasured Jack’s foot and off I went. It was so easy once I made up my mind to finish them!

I was captive in the truck for a day last weekend while Jack ran radar for our local snowmobile club’s annual radar run and I was able to wrap them up. 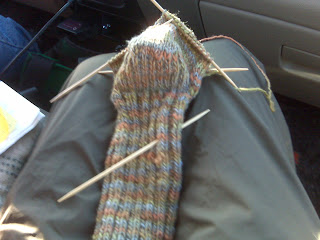 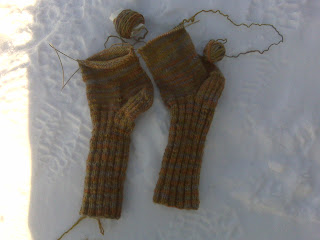 Webster was thinking they might make for an interesting bed. 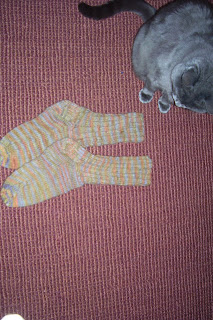 Jack wore them to do the chores this morning and I am happy to report they don’t slip down in his boots, they are warm, he loves them and they are DONE!
For all my friends who knit alot…you inspire and amaze me!