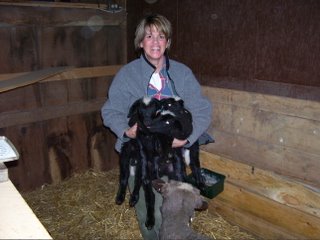 Yesterday late afternoon Ashley finally went into hard labor. We hoped she would be able to deliver herself but we had to call the vet after a difficult start. He assisted in delivering triplets, the first was hung up in the legs, the other two were breach. They weighed in today at 12#, 10# 10# respectively. What a load to have carried all these months. They are vigorous, identical jet black with a white spot on each head. Ashley has not let any milk down so we have been bottle feeding them now every 4 hours. We magic markered the white spots on their heads with a dot, an X and a square to tell them apart for feedings. Ashley is so worn out and is running a bit of a fever but we have her on a regimine of things to get her up and running again. Whether she will give milk is still unclear. But she loves them all and is being a good mama ewe otherwise. For now the peace is back in the barn, the schedule is busy but stable!