So here is Bea this morning. I just gave her some cubes of alfalfa and she loves me! Don’t you just LOVE her name? I will never be one of those hard core shepherds who never name their sheep, just ear tag numbers. I would never want so many I couldn’t distingish each one from the next. 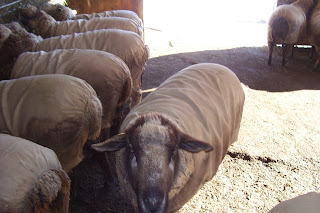 We bought Bea in July 2003, she was born 1/26/01. I saw her photo and thought “boy, not the greatest looking ewe. Split ear, funky looking face, but I just LOVE the name!” She was a proven good lamber and mother so I thought why not. And she also is half sister to Memphis who has her day in the sun tomorrow. She and Memphis came from a farm in Washington state, darn good stock. That split ear bugged me!!! And you can see that her neck is shaved? I was told she liked to eat grass on the other side of the fence and had done it so much she had a perpetual bald spot! So I had this nagging question….is she one of those ewes that is always getting into trouble? 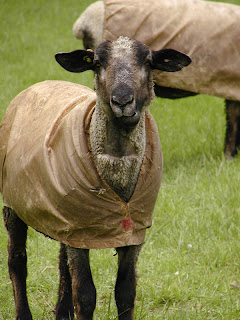 Here is Bea a few days after she arrived with two other ewes we bought, Daphne and Mila and a wether, Wetherby (white lamb laying on the ramp). Daphne, Mila and Wetherby were just 4 months old and had assumed Bea as the mother figure. Bea is one heck of a mother. Very protective, attentive and alert at all times. If there is a movement or an issue at the field edge or in the woods she will stare it down. She is up front and strong. One windy day a green plastic trash bag had found it’s way loose and into the field, catching on a fence post. I watched here react before removing the bag. She stood and snorted at it from across the pasture, just like a deer. She wouldn’t let up on it and I like that about her. 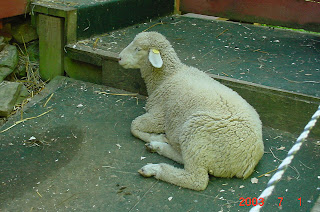 Here she is later that summer with Daphne and Mila and Memphis to the far left, just chewing and grooving.

She is a joy to have here, and gives me the most incredible hugs…I call them Bea Hugs and I am going to get a photo taken of one soon! She comes at me head on, puts her head over my shoulder, we are chest to chest and she just leans into me. It is a great reward for taking a chance on her in 2003. Happy birthday Bea! 8 years old today.