Della and Bea kept us busy over the weekend. Della went into labor on Friday and we helped her bring triplet ewe lambs into the world. Regrettably the last lamb was stillborn. We couldn’t have saved her. But just imagine one CVM ewe lamb and one Romeldale ewe lamb! Della gave it her all and delivered perfectly. Friday was a rainy cold day and it settled in on Friday night. The little gray ewe was shivery so I put sweater sleeves on them. 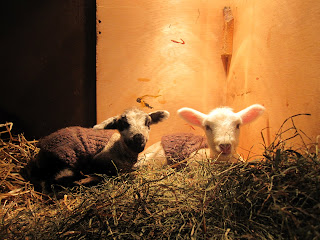 The gray ewe weighed in at 6#! Tiny. The white ewe at 10.5#s.The gray ewe was born first but had the biggest fight ahead. On Saturday morning I called the Doc as Della was unable to give any milk out of the right half. Try as we might she would not let down any milk. We felt she needed some extra attention. He came and confirmed our fears that, unbenounced to us, she had an old case of mastitis and her right half was completely scarred and after every effort he found the teat completely scarred over. I bought Della from a farm in Ohio who had bought her from another farm in Ohio who had bought her from a farm in Washington state. I was assured she had no issues but that wasn’t the case. This is the risk when purchasing adult sheep from other farms. I had given her an injection in the morning for the infection, the Doc gave a couple more to help her and we put her on an anti-inflammatory. She will continue with injections and anti-inflammatory for the remainder of the week.

The good news is her left half is still intact and giving enough milk for one and a half lambs. The white ewe is much more vigorous than the gray lamb and all of Saturday got the lions share of what Della had to give. We gave each lamb a tube of colostrum Friday night (meaning we run a flexible tube into their mouth and down into their belly and with a plastic syring push the milk down through the tube into the belly)which gives them that first milk from the mother plus assures they are getting enough nutrition but by Saturday poor Della was so weary from her trial she hardly cared if they nursed or not. Saturday night we fed the gray one a bottle, reluctant as she was, and the white ewe was getting enough from Della. 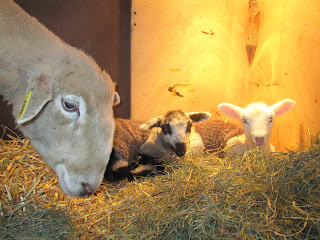 Sunday morning we did early barn check and the little gray ewe was very weak. It doesn’t take long in the first few days. So we decided she needed to get on milk replacer immediately and let the white ewe milk out Della. We gave the gray ewe a bottle every 3 hours on Sunday and by evening she was pretty happy again. As of this morning she sees us and sees bottle which equals happiness and comfort. At day three she just stands and takes it down lickety split. Here she is this morning after feeding. 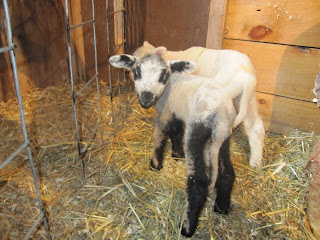 We have an ongoing name theme here of cities and towns in the South. Memphis started the name game and it has been fun all these years. The gray ewe is now known as Phoenix, a gray bird who rose up from the ashes. The white ewe is Magnolia. Bright, light and full of spring! 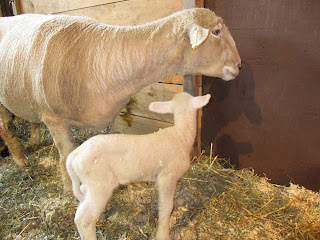 Here they are this morning. Looking 100% better! Della has improved vastly. She will recover. 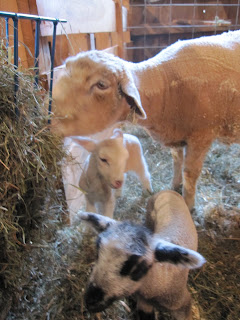 I hosted a Carding and Combing for Spinners workshop Saturday, amidst all of this, and at lunch time I decided to take a quick look on the barn cam and saw Bea licking a small lamb in the barn. At first I thought Phoenix must have gotten out (intellectually I knew that wasn’t the case!). The surprise was, although she was due, she had shown no signs of getting ready to lamb. Boom, one hour out of the barn and she did it! Welcome a little ram lamb, a single! He weighed in at a whopping 13.5#! Bea is a big ewe, striking really. She is also a daughter of the great old line of Todd, and the granddaughter of Dud, so this ram lamb could prove a winner. 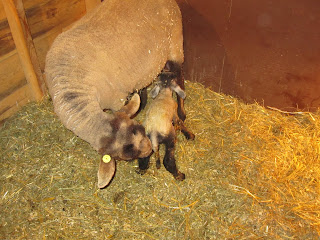 Here they were this morning. Look at how big he is at two days old! 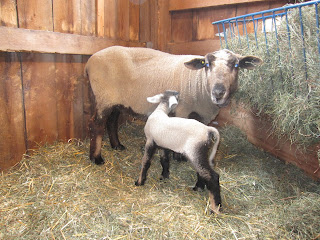 Meanwhile good old Memphis and her ram lamb are eager to meet the new arrivals. I decided on Griffin for his name. State by state, Griffin is in Georgia, Magnolia is in Arkansas and we all know Phoenix! So here is Griffin looking in at Bea and her lamb. Too cute! Come on out, I need a playmate. 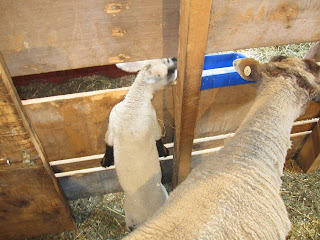 I haven’t decided on Bea’s lambs name yet, he needs to grow just a bit more. If all goes well, Bea and lamb will join Memphis and lamb tomorrow. I suspect Della and babes will stay in the barn a bit longer til they are all strong enough.