Saturday morning Jack went to the barn to do the chores and when he arrived all the sheep were out in the paddock which is completely unusual as they usually all flood the barn to say hello. Jack could hear a light pawing sound on an adjacent barn wall. He rounded to the corner to find Crystal on her back, stuck and just about dead. She was against this wall, with one leg pawing the wall, but very weakly. 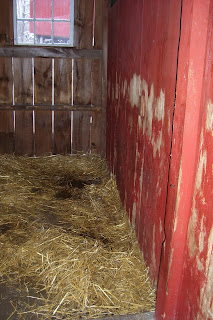 This condition is know as cast and once a sheep gets on their back they cannot get up without assistance and will die within a matter of an hour.
It occurs when the sheep gets into a position, usually after lying down where they cannot get righted. It occurs more often when they are full with fleece or before lambing when they are quite heavy. Presently Crystal is sporting more than 12 pounds of fleece and she is already a large sheep, weighing 200#!
Jack swiftly rolled her over onto her knees and after a few minutes helped her to her feet. She was covered in straw around her head and visibly shaken as you can imagine. By the time Jack put out the hay she did eat some. 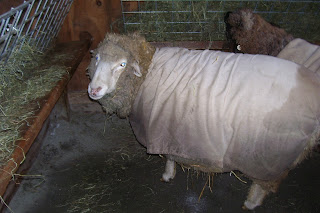 We had a lot of cleanup to do after the last snowstorm and while I worked getting snow off the barn roof and Jack removed snow from their loafing lot, I watched Crystal. I wanted to see her drink water and chew her cud. I didn’t want bloat to set in and as an extra precaution I gave her 3cc of liquid simethicone, like you give babies for gas. It wouldn’t hurt and seeing as she had been on her back, unable to process her feed through her rumen I thought it an easy treatment. 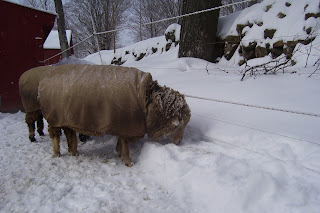 Here she is eating snow which satisfied my concern for drinking water.
As we finished up the snow removal, I looked over from the lane and she was standing on the rocks chewing her cud. She was back in the land of sheepdom. Close call.