And today we celebrate Daphne’s 6th birthday! I have a feeling I will be saying this more than not as I go through all the birthdays and describe each sheep….Daphne is just so sweet and mellow. She is not a stand-out sheep for personality….very low key. But if ever I need a gentle conversation and am willing to listen she will be there. Sheep like for humans to get down so they are at eye level before they are willing to commit to any real discussion. Daphne’s style is to put her head down and just hang out and if I cup her chin in my hand and hold her cheek to cheek with me she will stand there for hours. She loves it. I have had her snore while holding her that way! Here she is just after we bought her in 2003. 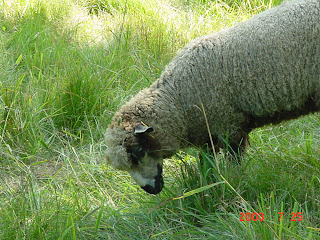 One thing Daphne is proud of is her fleece. She can win a ribbon every time. So convinced I was, I saved it to submit in the fall of 2007 to be judged at Rhinebeck. Some of you read this story after I posted it here in October 2007, I was so upset. But it goes like this.

I took three fleeces to Rhinebeck and was at the door at 8AM to enter them. That went great (so I thought) and I went off to open my booth for vending. At noon my friend Maryann went over to the sale barn to see what the results were. She found Daphne’s fleece gone and Joe and Judy Miller, the people who run the sale/judging, had no idea where it had gone. When Maryann returned and told me I roared over there, as you can imagine. After a lengthy go-round they basically put up their hands and said “must have been stolen”. I was fit to be tied and somehow it didn’t ring true. I had labeled it and it was 7 pounds, a bit tough to steal. But there was nothing I could do. This is the fleece before I took it to Rhinebeck. 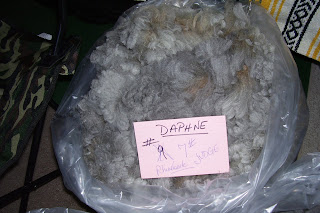 Well the months passed and come early spring of 2008 a woman contacted me to reserve a fleece. She said she had bought one before and loved it. You know where this is going, right? I asked her where she had bought before and she said Rhinebeck. Ah ha! So through the course of emails back and forth she said she picked Daphne’s fleece out early in the AM before judging and then waited in line to buy it at the appointed time. She told me I had won 1st place in natural colored fine wool class! I had a ribbon! And she was so psyched to have purchased the winning fleece! She sent me pictures of all the tags that came with the fleece. But of course the ribbon was not there as it would be given to the owner of the animal…me!

At that point I was relieved to know it had sold and that I had won a ribbon! So I contacted the head of the Rhinebeck Festival, Bob Davis, and told him my story and sent all the pictures. I told him about the Miller’s inexcusable negligence with the whole situation. He appologized and eventually after many months I got a check for the fleece. But I never got the ribbon. To this day I write Bob Davis, who had told me he would get the ribbon to me, but he will not reply now.

So I have resigned to just knowing Daphne won the prize and resolved to never show at that venue again. What would you do at this point?

Here is Daphne today, a lovely face and a lovely fleece. My Daphne doll, happy birthday! 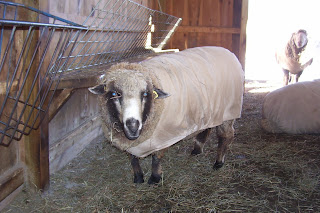