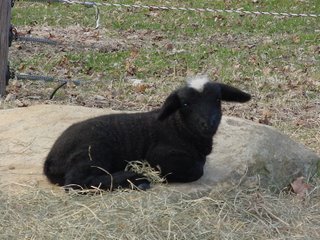 The past few days have afforded me some time to be able to commune with the flock during their reasonably dull existence of eating, nursing and resting. They are a good group, some more gregarious than others, some want to be left alone while others are right in my face demanding some shmoosing. This afternoon Ashley and I had a rather long (maybe 10 minutes) visit. Ashley is the ewe who had triplets 3/30. She is 11, has been across the country, lived on a couple of farms and had her share of lambs. Her fleece is the sofest, it truly rivals any I have ever felt, a rich, milk chocolate brown color. She has big yellow eyes that will tell tales that would draw even the shyest sheep in to listen. Ashley knows a lot. This afternoon she and I had a good chat. Her lamb is up and running now, the weather is pleasant, the hay plentiful and Ashley is back to her old self. She is thankful for today. When we bought Ashley we also bought Daisy and Jessie, the black ewe we lost 2/24/06. Ashley didn’t think too much of Jessie and Daisy. They weren’t her lambs and she couldn’t care less. But over the following year those three would be found regularly grazing together in summer pastures or sleeping together at night. Daisy and Jessie had dubbed her queen mumma, and Ashley accepted the post. I find myself in awe of the miracle of Ashley’s lambing this year. Jessie died 2/24/06, 5 weeks shy of lambing day. Ashley was bred to a taupe colored ram who does throw a lot of color in his babies.
But Ashley created and grew 3 jet black lambs, all with one identical white spot on top of their heads, two ram lambs and one ewe lamb. The lambs were all the spitting image of Jessie. I remember as they came into the world thinking how could this be? Not one, not two but three Jessies! We found homes for the two ram lambs and have kept the little ewe and today seemed the fitting time to name her Trinity. The unity of Father, Son and Holy Spirit. A resurrection!
Trinity’s spirit is indomitable and she will remain here through the pasture grazings and the winter storms as long as she chooses to. Trinity…an Easter blessing.