We have had a little bird here for a week or so that has been different than the others. It flits around under the feeder and comes and goes but yesterday I noticed it wasn’t leaving at all. I went up to it and could pick it up. And we know that’s not normal. It would huddle under the snowbank eaves to stay out of the view of other birds and then eat some seed and then rest. After an hour of watching that I thought “no, this little one needs help”. 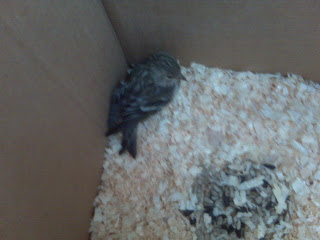 So I called the local wildlife rescue center, Winchester Wildlife Rehabilitation Center, and they were willing to take it and see if it could be saved. So I put some shavings in a box, a handful of seed and put the bird in the box. They said close the cover and let it be dark and peaceful. That little bird was sooo quiet. I dropped it off yesterday AM and asked that they tell me how it fares. I will let you know.
I was doing the chores in the barn yesterday and a hen flew up into the window basket and peered in at us. The sight of her landing made the sheep jump in unison! 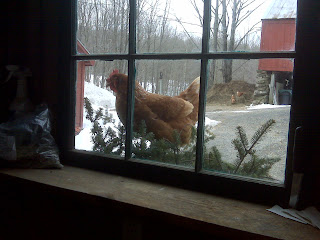