The past few days we have been readjusting to life without Shelley. This was Webster, the cat and Sidney, the lab, the morning after Shelley passed away. They were waiting for her to come for breakfast. Webster paced the house and in and out of the shed that whole day, looking to all her regular sleeping spaces. Sidney just slept in his bed, chin in his paws, despondent. Animals know about loss, in their own way they show the distress. 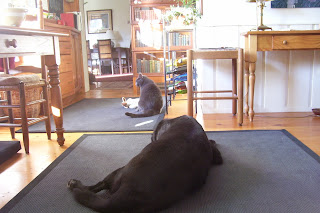 This is a picture of Daisy after Jessie died a few years ago. Daisy and Jessie were best friends. I bought them from another farm and they came together as lambs. That whole summer they lived together apart from the rest of the flock until they were old enough to fend for themselves. The day Jessie died and the days that followed had Daisy looking and waiting for Jessie’s return.She baaaed and paced and kept to herself. It was heart wrentching. 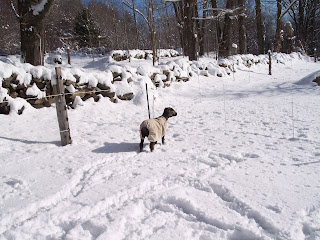 I mentioned to the vet that I wished I had saved Shelley’s fur over the years so I could spin and knit something warm for me. Something to keep close. I learned yesterday that they trimmed Shelley and saved me the fur to pick up. I have never worked with dog hair before and would love any comments or ideas on how to work with it. Her staple length is 3″ overall. I was at a fiber show a few weeks ago and a vendor was spinning and then knitting hair from her dog and had already knit a fabulous pair of glovelettes. I thought perhaps I could blend some of our fleece with Shelley’s hair if there is not enough to work with. Ideas please!