Ashley, our most famous, beautiful ewe has gone to greener pastures. Her health has been slowly declining since early summer and with each passing week it has been harder and harder to watch. She still ate well and grazed but she walked ever so slowly from stiffness and lost her eyesight just weeks ago and her hearing was sketchy. 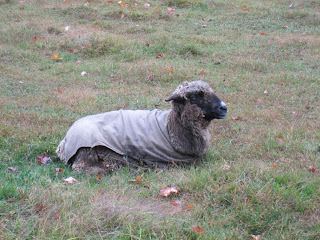 A few days ago we moved her and the rest of the flock back to the winter barn and pasture for the year. Here she was that afternoon, blind and tired but happy. But in the late day when the rest of the flock headed for the barn, Ashley would still be in the pasture, alone and baaaing. She knew they were gone but wasn’t sure how to get back. She couldn’t see and her safety was in jeopardy. Each evening we would lead her back with grain, loving words and a nudge from behind. She hated coming down to the pasture sheds all summer for the night shift. Ashley loved the high life and pasture was her glory. It was a hard transition for sheep and shepherd. 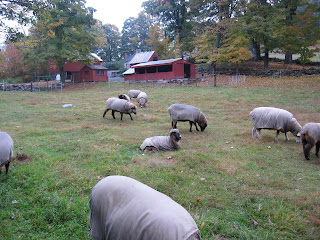 The day after we brought Ashley and the flock home I happened to be outside just at dusk. I heard a round of commotion, low key, but odd. I decided to walk down and double check the barn when I heard Ashley’s big bellow baaa from the wrong direction. She should have been in the barn but she was across the lane. I looked into the dusk and saw Ashley headed into the woods.

It was pouring rain, damn near dark and she was hobbling off into the woods, blind and lame and tired. I ran up to Katie’s cottage on the farm (our dearly beloved assistant shepherd) and asked for her to help me wrangle Ashley back to the barn. Jack was away for the evening so it was girl’s night! We quickly got back to where Ashley had last been roaming and meanwhile she had wedged herself between the ledge on the right and the tree on the left and she was down. 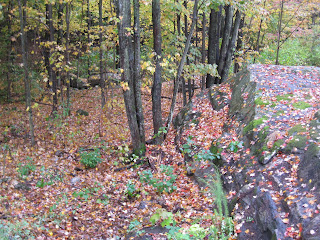 After a good 10 minutes of pushing, pulling and coaxing with grain and halter we got Ashley back in the barn in a private suite fit for a queen. The rain hammered down and at one point as Katie and I were pushing and pulling Ashley home, I looked at Katie and said “isn’t this a scene from Cold Mountain”. We both briefly chuckled. As it turned out Ashley had blindly walked into the electric fence outside the barn, gone through it at what cost and then wandered away, not sure where she was headed. I am so eternally grateful I was there in the barnyard at the moment I heard some off beat sounds. Otherwise she would have spent the night in the woods and perhaps not survived the night predators.

The next twenty four hours we devoted to Ashley’s comfort. She had her evening alone, safe in the barn adjacent to the rest of the flock but with her own water, hay, salt and comfy bedding and during the day she was with the rest of the flock. But we knew it was a lost cause. If she couldn’t see, nothing could be safe for her. Wednesday we made arrangements with the doc to make that hard, hard final decision. It was a lovely day on pasture, all the sheep were just mellow and cruising. I “asked” the rest of the flock late-morning to spend some time with Ashley as she would be departing later in the day and as God is my witness within two hours most of the flock was resting around her. Up until this time, all summer, Ashley quite often was just sleeping alone somewhere on pasture. They know. 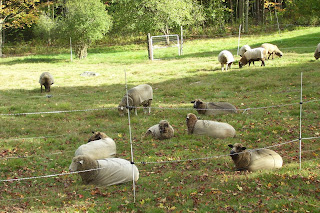 Ashley was a queen. I bought her when she was 8 years old as she traveled the sales circuit. To others she was a “has been”. Old and useless. I came to learn she had the most divine fleece I have ever encountered. In fact, I never sold her fleece after the second year I owned her because it was too good to be true! Soft as butter. Her cheeks were soft, her neck, her hind quarters, all of her. I chose to buy her so she’d have a good final run on life. And she did. She lived here for 8 more years and gave us more than we dreamed of in so many ways. In 2006 she gave us triplets at 10 years old! 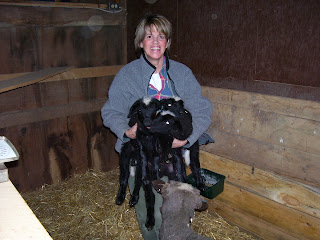 She loved the fall when the apples fell…like an elixir. 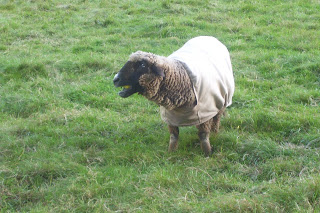 She was a clown. 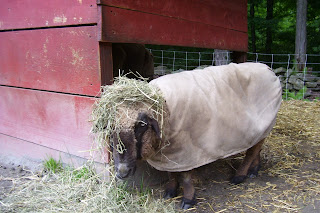 And most of all a lady. 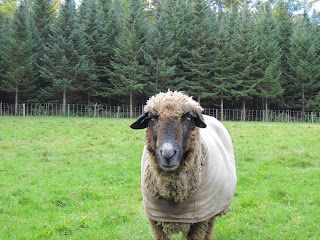 She was laid to rest, September 29th, 2010 at Long Ridge Farm. A jewel in the crown. Forever loved, forever missed.