From Pittston Farm we rode 50 miles in less than two hours on some of the most magnificent trails; we cruised east around the top of Moosehead Lake to Northeast Carry and down to Kokadjo (phonetically Ko-Kay-Jo). Kokadjo has a great gathering place where you can gas up, eat and drink, buy some snacks, tourist stuff and the essentials for your snowmobile. We ate lunch there and it is so busy you will always eat with other people at your table. We met three young guys that gave us some good trail tips and a few laughs. They had gotten up at the crack of dawn, left Lincoln, ME and rode to Pittston Farm and were headed back to Lincoln by nightfall. They already had 175 miles on at 11AM! Oh to be young again. This is a barn at Kokadjo with the gas tank in the foreground. Signs of a farm long ago. The main building is a nice new building just to my right and all this sits on the shore of Roach Pond. 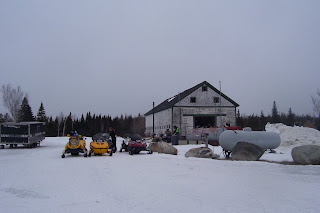 After we left Kokadjo, we headed south toward Greenville, ME and took a connector trail we’d been told about which would point us to the Northeast and eventually Millinocket. We were riding along and Jack and I got sandwiched between a group of 6 other riders and all of a sudden we arrived at what I thought was a horrific snowmobile accident. There were people everywhere and pieces of metal. But then we realized we were at the site of a B-52 crash in January of 1963. You can read the story below on the sign. 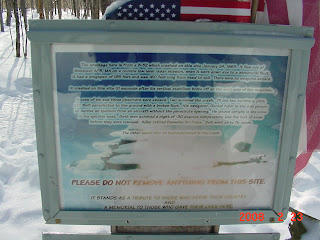 It was terribly sobering and sad. Pieces of plane everywhere, out here in the middle of nowhere. And imagine if the snow is 5-6 feet deep how really large this all is in the summer. What is most amazing is one wouldn’t be likely to find this site unless by snowmobile or 4-wheeler. 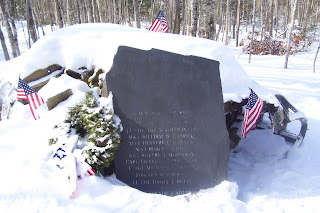 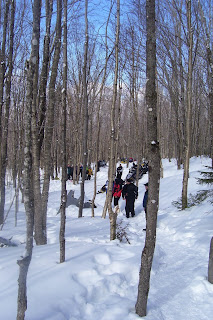 We left that site and stopped on trail for lunch. It was bit cold but the sun felt good and the view was magnificent. I think this is Horseshoe Pond but not exactly sure as there are tons of lakes in this area. 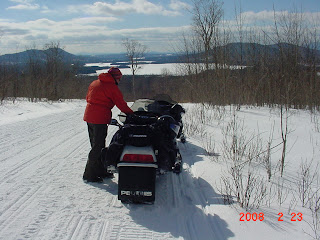 We continued on our way not having a very good idea of the time involved in getting back to Millinocket. Oh sure we had good maps, and legends for mileage but it still doesn’t add up when you ride it the first time in a new area. We came to an intersection where three hikers were talking with three snowmobilers. The hikers, 2 woman and a man, had gotten mixed up on their hike and were about 4 miles from the AMC hut where they were staying. The snowmobilers were going the opposite way and low on gas (little did we know we would be also). But Jack and I each took a woman and snowmobiled them back to their camp. They would then have the host return to pick up the man. It was 2PM and going to get cold. Of course the AMC camp didn’t allow snowmobilers but weren’t they happy for the ride! So good deed done we pressed on. We saw beautiful views, more deer, stopped to give synthetic oil to a group of snowmobilers who had run amuck. They recognized Jack’s coat from Kokadjo. It’s a coyote hunting coat for winter camouflage which Jack always wears on our trips. It’s amazing the people we have connected with that remember it. Wouldn’t you?! 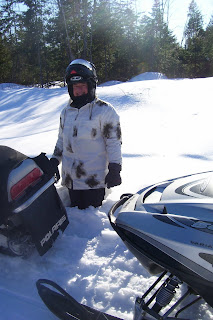 On and on for miles and miles we rode. At 5:45PM we crossed the Abol River just before the gas pumps closed at the Abol store; Jack was on empty, close! A nice couple ran the store, neat place, a game check station plus supplies and tourist stuff. Behind the store was a herd of deer all feeding at a station they had set up for them.
We rode into Millinocket at 6:45PM, ready for a warm meal and reeelaxin’! It was a great trip and thanks for coming along!