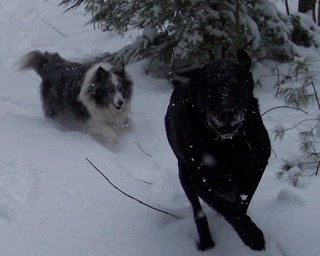 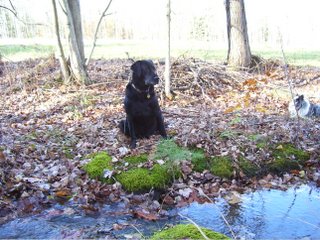 One night back in April of 1998 we heard all sorts of automobile sounds outside on the road, we didn’t think too much of it, someone just turning around perhaps. The following morning we found a black lab in our open shed, hiding in the back, not tied, but quite rattled, he sported no collar or tags. He absolutely would not leave the shed so we gave him a bed and a big bone to chew, called the humane society and they took him away. We felt his rightful owner may want him back. As it turned out we think his rightful owner was the one who left him the night before, not wanting to feed him anymore. We have an idea who but it doesn’t matter anymore. When no one had claimed him after a week, we decided to adopt him. We were told he was untrainable and should be put to sleep. We named him Sidney. The next few years proved to be a real challange for even our steadfast dog care and skills.He stormed anyone who came by the house, friendships were jeopardized and even police reports filed! By then we were in too deep to turn back. I used to call him the big black boogyman. His alpha personality has subsided, and at 8 years old, he is a complete mush with those he knows and likes; he loves this farm and his life here. He loves the fall and winter most of all. Anyone who knows Sidney personally knows that a kiss on the lips is unavoidable; no matter how hard you try to avoid him, he’s faster! We are thankful this great big crazy lab came into our life!