Peach’s injury has me concerned. After confining her and Crystal Tuesday to the big barn for an unforeseen period I hoped that giving her an anti-inflammatory and “hay rest” would start the healing process. But by Friday morning she was no better. As you can see, she held her right rear leg up off the floor and hobbled on the other three legs to get about. There is a limited course for the drugs to be safely given before other problematic symptoms might set in so I felt a vet visit was in order. The doc was here by 10AM. She checked every possible issue, as we had before. The leg is just so darn swollen above the fetlock. 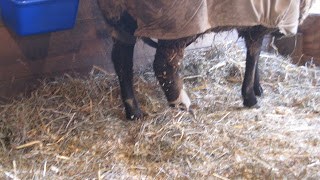 With no clear answer, I bit the bullet (with Peach) and opted to x-ray the leg to be sure there wasn’t a fracture. At least it would rule something out. After a mild sedative we got Peach on her side and I held her, although she was quite peaceful, for the films. 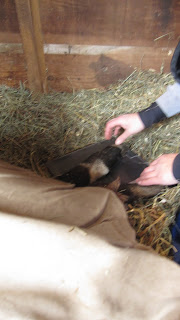 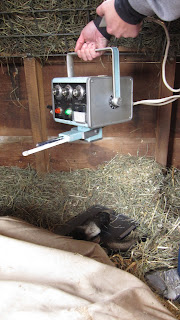 Later Friday afternoon the doc called to say nothing was broken. So it must be a torn ligament or tendon. A slow heal if at all. But she did suggest a 5 day course of steroids, one injection per day, with a continued half dose of the anti-inflammatory. I gave Peach her first shot yesterday. This morning no improvement. But she has an appetite and is calm…seemingly accepting her plight with her chum Crystal. We are having a miserable rain storm today and I suspect they are sharing sheep smiles in their high and dry digs despite the confinement. Tonight at chore time, Peach was up and putting ever so little pressure on that hoof. I am looking for any improvement and it was ever so small but perhaps a ray of hope. I know most farmers would cull Peach at this point. It’s too expensive and time consuming to treat. But I have to see it through. If she heals, awesome! If she doesn’t I have already accepted that reality. For now she is calm, eating, perhaps healing.

If you say prayers, please include Peach. She’s a lovely ewe and a special friend. 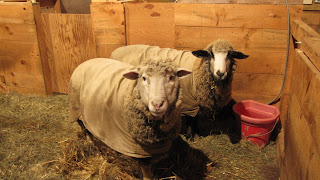 Meanwhile back at the winter barn Griffin is holding court at the hay racks…. 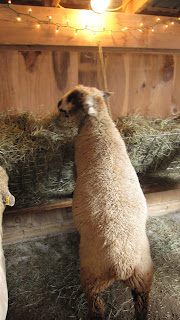