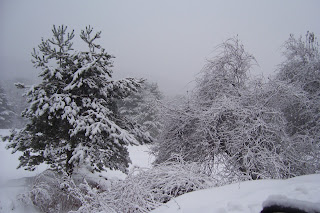 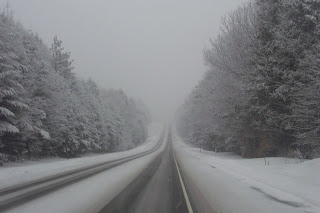 Jack and I took a drive over to Antrim to check out a store named A Place In The Woods www.placeinthewoods.biz/ It is under new ownership since last July, John and Diane Kendall, and I had met Diane a number of times at various sheep festivals around New England. Diane is known for her wonderful teeshirts that espouse various knitting and dyeing lines on them with fun artwork. They are for sale in the shop. I bought one yesterday, simple white with green lettering “Knit Free or Dye”. We also bought some new gloves, fleece with thermal linings for $10…good enough! It’s a nice store with something for everyone. A couple can go there and both be entertained from the hunting and fishing to the clothing, boots and canoes, and much more.
It started to snow just after we got there, very lightly. Antrim is northeast from us and with the storm coming in from the west, by the time we left to come back the roads were snow-covered. But we love driving in the snow so it was great fun. Of course we like ANYTHING to do with snow! This morning on the news we heard the roads were at their worst from 4-6PM, exactly the times we were on them. It has been snowing since yesterday with at least 6 new inches of snow!