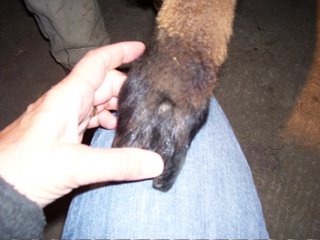 There are precious few sheep health care tips I can offer to shepherds whose outcome is more rewarding than this one. A few years ago one of our ewes went lame, and we madly read all the sheep books we had, called the vet, the whole nine yards. Then I re-read in one of our books about the gland located just above the hoof of a sheep’s foot (you can see the light area just above the “toes”in the picture, Ashley has chosen to be our model today!) which functions to lubricate and eliminate friction between the toes, and occasionally the gland gets clogged with dirt and becomes infected. Lameness occurs rather quickly after the clogging begins. The first time I noticed this ailment, our ewe, Memphis was holding the affected leg up and when she did walk she was limping if not hobbling. So with a little hands on experience, we have found that 9 times out of 10, the reason for lameness is this clogged gland. Last week one of our wethers went lame, it wasn’t an all day, every day lameness, but this week he became quite uncomfortable, holding the leg up, barely putting pressure on it when he walked, and carrying 225# on 3 legs takes alot of energy. We brought him back to the barn on Tuesday, and as a precaution, trimmed his hooves; they were fine. I did check the gland area and it seemed fine, so we turned him out to pasture again. But yesterday he was still really lame. Much of our greatest work is done in the dark of the night and last night was no exception! Both of us, independently, decided that the gland had to be the culprit, because he could kneel or lay down, but standing hurt. This morning when I checked on him he was lying in the pasture with his lame leg pointing out and he willingly let me prod around the area and inspect it. Tell me they don’t know when help is needed! We brought him back to the barn, and while Jack held him, I really applied pressure to the gland, squeezing it down and out toward the opening, allowing the clog to undo. Then I poured a bit of peroxide over the gland area and we set him free. Within an hour Wetherby was walking with barely a limp, and tonight he is back to normal. It may take a couple of treatments to clear it up completely but it really is one of the simplest health issues to treat and offers almost instant improvement.