Three things come together in NH in late February to mid-March: maple sugaring, mud season and town meeting. We have hit the perfect storm this week. The mud on the dirt roads is as bad as ever…knee deep in places and the frost isn’t even out of the ground yet. We had such an early cold winter the frost went deep and with the record snow fall this mud season will be a whopper. I hear that past our farm the roads are darn near impassable already.

Annual voting is tomorrow and then our town meeting is Wednesday night. Lots on the town warrant this year; typical issues like a new fire truck, repairing the pumper truck, we need a new highway truck and so forth but folks in town aren’t feeling very flush right now so attendance will be high and the debates heated, I suspect.
I’ll update those two issues by weeks end.

Now about sugaring, we are having a season but it’s been a bit up and down. You have to have cold nights (below freezing) and warm days (above freezing!) for the sap to run and that hasn’t been a steady thing so far. But Friday into Saturday was pretty good so we spent some time at a sugar shack in town Saturday afternoon into the evening. 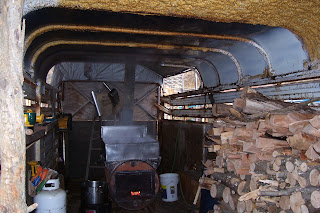 Last summer I did a post in August about Reggie who had driven his team of draft horses past our farm as he was working on a logging project not too far away. Saturday morning I was out in the workshop and Reggie drove by and we had a visit, roadside style. He said he was giving sugaring a go for the first time from beginning to end, with his team of horses helping by doing the lugging. He invited us down in the afternoon. By the time we got there he and Norm had already gathered the sap with the horses so we got to hang out, have a few beers (pretty much a given) and see what might come of the days gathering. 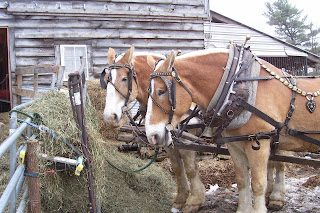 Now this is a sugar shack to write about! It’s portable! He can haul it anywhere with his truck. Reg took his horse hauler and converted it, temporarily into a sugar house. Inside there is a barrel stove with an evaporator on top, enough space for wood to feed the fire, space for folks to gather round the stove and outside the horses can pull up next to the sugar shack and the sap can be off loaded in buckets to pour into the evaporator. It wasn’t a romantic Yankee Magazine sugarhouse but all in all it worked! They even rigged up a leaf blower which could be pointed at the draft to the barrel stove to further fuel the fire! 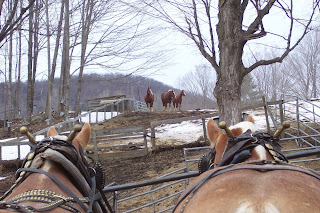 I spent some time in the barn during chores as Reg cleaned the horse and cow stalls to ready them all for the overnight. Jack and I have driven by his barn many a time on a cold winter evening and it looks so cozy. Now I see why. He has 5 horses, 4 of them draft horses and one guernsey cow, Fosta. Fosta is about 17 months old and due to calf in July. She is a lovely Guernsey and it will be nice to see a babe coming along this summer. Up back there are some 50 hens which are layers and Reg sells the eggs around town. 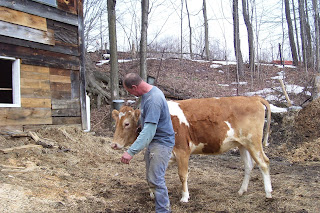 We came away from the day feeling good…had a lot of good laughs, helped as we could and once again knew how much we love our town.