The barn that Jack, Kip and Lyle built 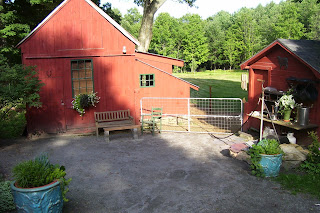 Currently set up for our annual Earthues dyeing workshop location this week, this is the barn that Jack, Kip and Lyle built! In the summer of 2001 Lyle, friend and owner of Pat Rawson Construction became a talented building mover for us. He moved 2 buildings to new, more usable locations. They are both pictured here: the barn on the left and the little house to the right. The barn had been across the lane and behind another barn, had no windows and was quite rotten from years of no repair. The little house was across the road by the cottage and served as a child’s playhouse in years past. It also was quite rotten, the roof nearly caved in and sills gone. Jack did a number of improvements and then added the little shed attached to the barn in 2002. Then in 2005, Kip of Courtlan Construction added the large addtion shown here. It made a huge difference in the winter chores when it snowed as we didn’t have to shovel just to get to the feeders. 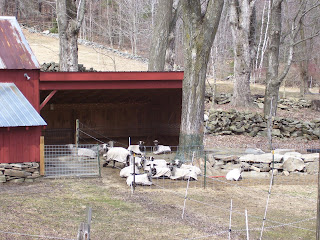 And this summer Kip returned and put a front addition on so to further decrease the snow shoveling come winter. Jack has done all the wiring, painting and built all the stone foundations, added new soil and reseeded the pasture area and added new hardpack inside the barn area. Jack and Lyle also extended the water line from the frost free hydrant by the little house (formerly a chicken coop currently my sheep /fiber house) down into the pasture and into the new addtion where there is another frost free hydrant. I had hoped to put in an automatic water system but we couldn’t dig deep enough in this tough New England soil to take advantage of the geo-thermal heat. Just the same no more lugging water to the barn! The picture below was taken on July 16th and the one below that was taken August 12th. Great job by all, mostly Jack (of course). 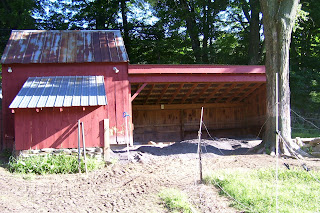 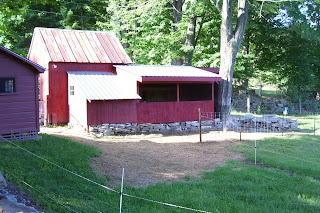