Yesterday was the longest day of the past 9. Still no power and yet we had settled into the rhythm of the situation. We had a routine to maintain a level of comfort, order and all systems functioning. It was 10 degrees at 9 AM and not above 15 the rest of the day. Friday night we got foot of light fluffy snow and all day Saturday it continued to flurry and add another couple of inches. It was absolutely a beautiful snowfall. This is our shepherd assistant with her little sister Bethy who played in the snow for hours Saturday afternoon. Refreshing in light of the strife going on around us! 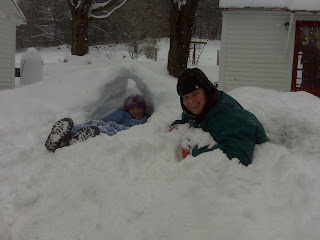 By 8AM our next door neighbor had buried his plow truck in his driveway and asked Jack to help him pull that out, then Jack plowed while I did the farm chores and shoveled around the walkways. At 11AM another neighbor came by to ask Jack to get his daughters car unstuck in their drive. He, his wife and daughter had been holed up around their fireplace for 9 days, showering away from home and exhausted from just surviving. While Jack was gone another neighbor stopped to say a LINE CREW!!!! was on the adjacent road repairing the last problem they had in order to restore power. When Jack returned we hustled (against his wishes, he didn’t want to bother them) down to where the line crew was working. I walked into the woods and politely asked if they knew our road was without power. They had no idea! At least 10 homes on our road had called multiple times to report the problems. Poor communication, I’d say. 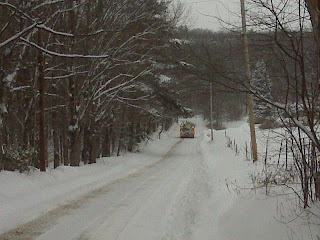 One of the lineman knew the area well and had worked with Don Paine who we bought the farm from. We chatted for a bit and they said they’d be up within a few hours to check out our problem. Oh my were we hopeful, finally! Jack and I went off to get more gas for the generators and take a trip to the transfer station and upon our return lo and behold they were repairing the snapped pole on our road. By then two line trucks were there, roughly 3:00 PM. We started calling neighbors to let them know the work was in progress….it was a want to be block party as we all anxiously waited.

At 4:00 PM neighbors came up to ask if Jack could come pull out the line truck as it was stuck at the top of Cass Hill at Evelyn’s. The workers didn’t know the land and in turning around went to far forward and got one tire buried. And they hadn’t put their chains on first. Once again Jack roared off to help but this was too big for him to manage. 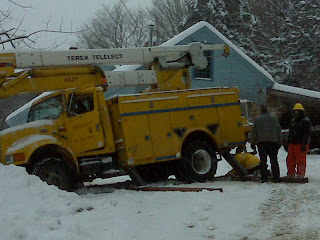 The truck that wasn’t stuck drove off to restore the circuit. Jack and I went to the barn for chores and as we were getting the hay to feed, the lights came on in the barn! And everywhere! It was spectacular! I have a radio that is on in the barn 24/7 and it was set to classical and the most beautiful piece of music began…very moving choral. I felt an overwhelming tearful thankfulness. Whether we had gone another 10 days or another 10 hours we were surviving and nothing crumbled around us. God was with us, our neighbors and even the line crew. 9 days.

We had one last task after chores and getting the buildings and animals back on regular power systems and that was to go up to Evelyn’s house to start her furnace. She is 91 and was taken last Monday to her daughter’s house as she could not continue to feed the wood stoves and battle the daily grind with no water, although she wanted to. Over the weekend we had gone by and given her a large water container with a spigot so she could have drinking and cooking water and Jack lugged wood for her wood stoves, but it proved just too much to manage for her.

We couldn’t get to Evelyn’s until 9:15 PM when the tow truck finally pulled the line truck out and the three trucks lumbered off down our hill to safer ground and hopefully some rest. After a bit of fiddling around we did get the furnace up and running and her 60 year old jade plants had managed the week despite no heat. They smiled as the furnace came on. 10:30PM we poured into bed and listened to the weather report for Sunday. Another foot on the way and high winds by nightfall. zzzz……my hero, Jack! 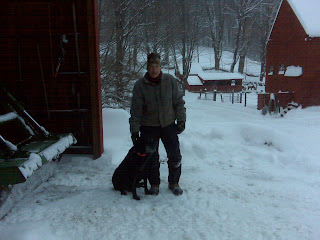