Things come in threes, they say. And number two was a surprise.
We have had a long period of cold weather this month. Daytime highs in the teens, moderate winds and no snow cover to temper the edge. One day this week we decided to leave the hens in their house for the day, with the option for a small outer fenced area. They have pretty nice digs really but I suspect it was a bit tight for a full day. I actually don’t know what happened but when I closed the hens in for the night our beloved Bianca was bloodied up. During the day something got to her (probably literal hen pecking) and the rest of the hens took to the blood, which is their wont, and she was a bit of a mess in the head area by 5pm. Although the damage doesn’t show, this was her after I got her to the big barn (now known as the infirmary!) 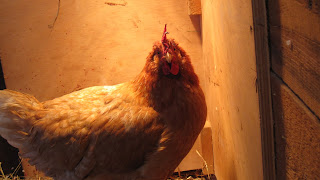 I wisked her straight away to join Peach and Crystal for some recovery time. I set her up so she could rest and recoup. She is able to get into a pen for her food and water but still be able to come out to hang with the ewes and mill about. 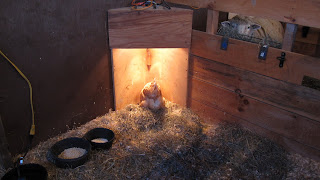 Peach is doing a bit better as of today. Your prayers are helping. Last Friday I called our favorite vet supply, Pipestone Vet Supply, who have, in addition to the best inventory of sheep supplies, a phone line connection to large animal veterinarians. It is the darned best connnection for livestock questions ever. When Pipestone answered the phone, as usual, they forwarded me on to a vet who happened to be Dr. Kennedy, Pipestone’s best (and all the docs are darned good). I have called them for about 6 years now and never had the honor of speaking directly with Dr. Kennedy. He’s a sheep vet and a sheep owner. He has raised more head than I could ever imagine running. He’s encountered it all and he just plain loves sheep farming. I told him about Peach’s predicament. I described the place in her leg where the injury is. I explained what course I had taken with injections, meds and x-rays. To make a long story short, he offered a one week course of another anti-inflammatory and the assurance that, knowing the leg wasn’t broken, that in due time and limited movement, she would heal. Perhaps this won’t be true… but on that backside of a cold day I was given hope that, in time, she would recover. I felt elated. 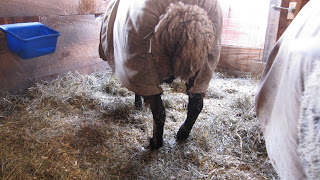 Peach’s course now is for another 8 weeks in the big barn with the company of Crystal and perhaps Bianca! The barn space is large and as healing permits, the area provides enough space to move about for the winter. She is putting actual weight on her hoof now as she ambles about.
While Peach rests, Crystal chooses to have an inquest with Bianca. 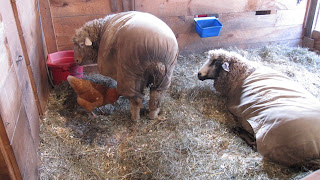 Meanwhile at the winter barn Friday night, during chore time, I found one of the wethers had an abcess. Nothing serious…we rounded him up, did a bit of cleaning and flushing and all is healing nicely.
That’s farming, that’s three and that’s it!