Where the boys are

The ram boys (now not so rammy) traveled north into the White Mountains with us on Saturday to their new home. It was a difficult extraction from the farm. I frankly hate it. At 8AM the farm was a hush. It was a very cool morning and the two groups were all happily settled in their morning routine: laying around chewing cud and waiting for us to come feed them, freshen water, open up the pasture gates for the day…same old, same old. And then in the blink of the eye, while Katie harmlessly did the chores, I gave Vitamin B shots for travel stress and Jack whisked them into the transporter. Wails came from ewe and lamb as we drove off into the morning sun. It is indescribable. I wept. And then we rounded the corner at the bottom of the hill and said ” we are on the way”. We had an uneventful three hour trip despite the baaaing from the rear. We laughed as we drove through downtown Littleton at a snail’s pace, both lambs baaing quite loudly as innocent bystanders and shoppers spun to see the ruckus! My truck plate said it all Baaaa- Finally we found the entrance to Austin and Guthrie’s new home. 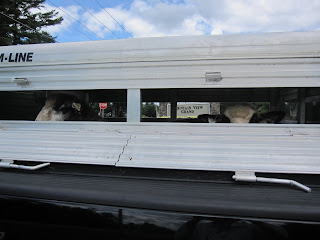 We wound our way up the drive and on approach the Mountain View Grand heaved into view. 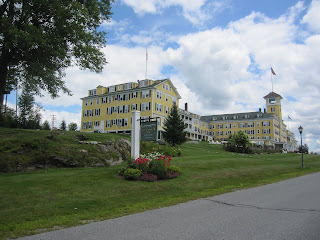 We found our way around the back of the hotel to the big red barn where the farm manager, Krista, and a few other farm employees were anxiously awaiting our arrival. 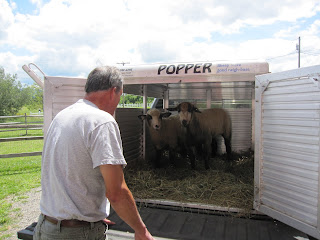 With speedy dispatch we offloaded the boys and got them settled in the barn in their own pen. Within short order they had met the llamas and alpaca. 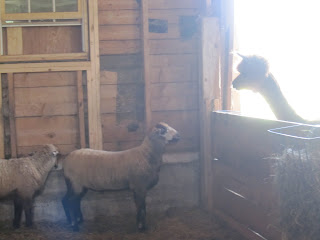 We stayed and observed for at least a half hour and the boys eventually started eating hay, found the mineral salt and had a big drink of water so we were satisfied they would be comfortable. 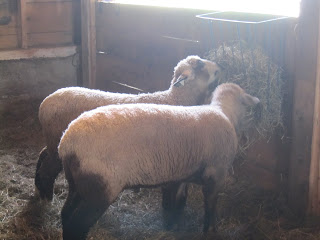 Krista is the farm manager and her husband is the GM at Mountain View Grand and he stopped down to see the lambs and took a photo of us before we left. 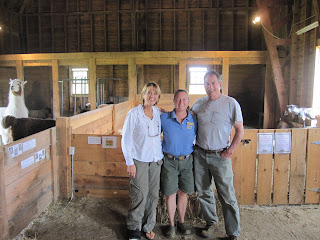 We were invited to enjoy lunch at the country club. It was a yummy feast and of course we enjoyed the wine and view. 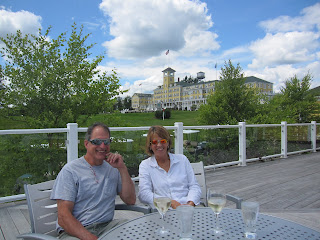 After lunch we took a walk up to the hotel, I on crutches with my walking boot. After roaming through the lobby we walked out onto the front porch which offered a vista of 19 peaks of the White Mountains and I met a lovely woman who began our conversation by saying “You shouldn’t have kicked him!” after Jack had already strolled by. There she was, dressed to the nines, on a lazy Saturday afternoon, enjoying life. I had to take time to visit with her! 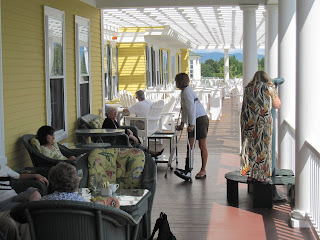 Since that day, the boys have had a breakout, made best friends with the smaller llama, and been chased by a Leister Longwool ewe a few times. I get daily reports as to their progess and believe they are in for a pretty good run there with lots of friendly guests to visit with and a superb farm staff. All the while bearing in mind I will have to go up from time to time for a sheep squeeze. I will always miss the ones that get away.

Meanwhile back at the farm this is the second harvest this week from the veggie garden. We have already put up 36 bags of green beans and broccoli and these baskets will put us up to 60! We have had little rain but with our evening watering the sunshine has provided a formidable harvest. Kalie, looks shy in this picture but she was just kidding! 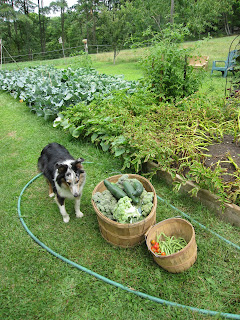