It’s been a non-stop trip so far. Our group of seven are veteran travelers, shoppers and full of the desire to learn and try new things!

We spent three full days in Saigon and traveled to Lauris each day to study in the atelier of Michel Garcia, natural dye expert and former president of the Association Couleur Garance, the French natural dye organization. The course was entitled Printing on Fabric with Natural Coulors From Plants. It was absolutely great to work with Michel. He taught us how to achieve a range of colours from one plant material by adjusting the mordant variable on cloth. It was an intensive but we also enjoyed lunch together each day at Michel’s favorite eateries. And the French enjoy food and wine! Wine was included as part of every meal where we ate. That is not always the case but Lauris served with style.

Then we travelled by private transfer to a new auberge a bit further south with our wonderful tour guide Marlene. She knows Provence like the back of her hand and as we had some time after we left Michel until our next destination she drove us to Rousillion so we could see the ochre quarry and also do a bit of shopping. We also toured the ochre museum to see how ochres were mined and created. Rousillion is a beautiful village sitting atop a hill. It has narrow streets, beautiful vistas and small shops dotted everywhere. 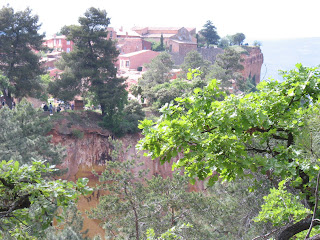 We have spent the last three days in another area sightseeing both known and less known attractions. 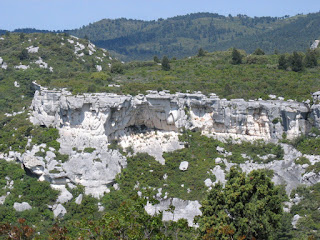 Atop a rocky outcrop crowned with a castle ruins. The Mistral winds are blowing and it was extremely difficult to navigate the rugged terrain with a constant wind speed in excess of 40mph and gusts up to 70mph. What was discovered there which would be of interest to a natural dyer?

One note…..you only have one chance to win during this series. When I return from France I will get in touch with the winners about mailing your token from France!