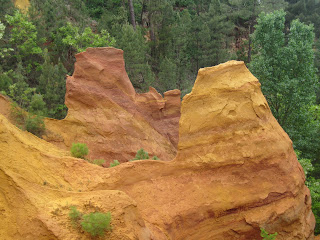 Bonjour! I arrived in Paris early Tuesday morning and after a bit of confusion found the gent that would drive me from the airport to the train where I would go to meet up with the rest of my group. However the traffic was a complete logjam and it took far longer than expected. He was very kind and took me into the station which is quite large and got me to the ticket line as I had to cancel and buy a new ticket. Within time I had a new ticket on the marvelous TGV. We departed at 11:15 and I took a seat in the upper level. The TGV quietly travels though the French countryside at about 180mph, I believe! I had lunch in the cafe and listened to music, napped and with a few hours was at my next spot. Here I was supposed to join everyone but they had a glitch also and so I took a cab about 45 minutes to where they were having lunch.

An absolutely beautiful village in the south of France. Within the village was a quarry known for ochre production up until the 1940’s. It still serves as a museum and educational center for the history of ochres at this quarry.

Internet communications are a bit of a challenge so bear with me as I travel this incredible journey.

The first person (not privy to my whereabouts) to guess my correct whereabouts will receive a small gift from my travels! Good luck!