That was August for me. I got back from Seattle the last week in July and although I knew everything would get done in time for Michele Wipplinger’s arrival to teach the Earthues workshops, there were times I wondered.

In a prior post I wrote about these shoes that we found buried in the wall of the house when we reinsulated. I learned from Katie, our farm hand, who worked for years at the Cooperstown Farm Museum, that there was a tradition in the 18oos to bury a pair of shoes in the wall when building the house for good luck. When Katie learned about this the shoes had been on a bench in the shed for about 3 weeks. One morning I got to thinking that those shoes had been in the wall here for more than 150 years and I’d better get them back in the wall post haste! They aren’t in the same spot, of course, but I did find a wall cavity that accepted them freely…back safe and sound to keep the good luck flowing. 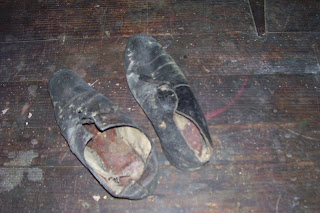 Poor Sidney had been struggling with a rectal polyp for at least a year. It had become quite uncomfortable for him and we had become way too intimate with the situation trying to keep him comfy. Our vet referred us to CAVES, a truly amazing veterinary service in NH, Capital Area Veterinary Emergency Services. They only work with emergency and complex surgeries for pets and what we were told was impossible to fix, they did in just a few hours. We took him up on a Thursday and he was ready to come home the next morning. Here he is the day after, pretty tender, but his pet monkey helped him through! This was not a posed picture….he set it up himself. Too cute, eh? On the heels of Sidney’s recovery, Webster,our cat, had an ingrown nail that had to be extracted. The pople who owned him before us gave him a Tendonectomy, which is as cruel as declawing, in my mind. So he can’t extend his claws to sharpen them and then they grow to long and grow right back into his toe pad. So we now have to check him every couple of months. Always something. 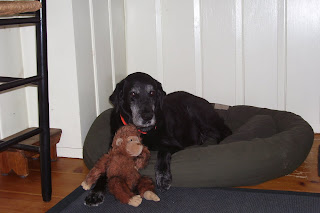 The weather was still pretty rainy in August but we managed to get 300 more bales in the barn. This looks like a lovely summer day but the temperature was actually 95 and humid. Great for haying but not for us! 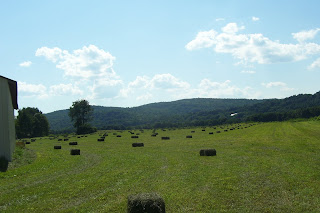 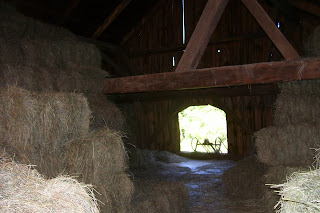 The rains simmered down in time for the Earthues workshops here at the farm from August 22-28th. We did have humidity and some showers but all in all it was lovely weather for natural dyeing. I will update on the workshops in upcoming post.

We finally got a stretch of sunny days the 30th of August and the sheep were sooo happy! We trimmed their hooves and changed a number of coats, and yes, I washed and repaired some 30 coats this summer, tough season for coats with all the rain. Just finished the last repairs this morning. But those sheep were feeling so frisky with the cool weather, fresh breezes and pedicures! Look at them run. I was out in front of them and Jack was at the shed and they ran back and forth between us for 15 minutes, sproinging and bouncing like lambs. 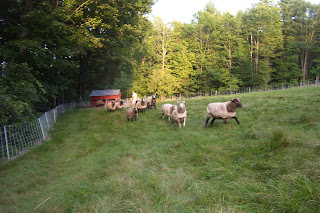 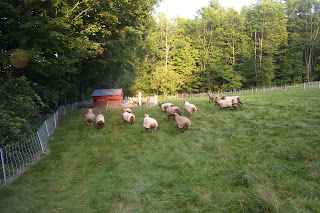 Here’s Katie moving the flock to fresh pasture one morning. 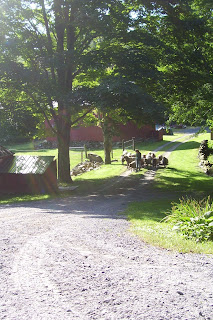 And they are enjoying a late afternoon graze. 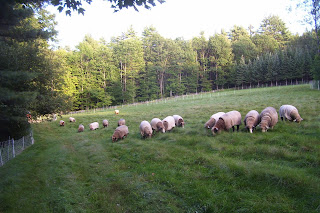 I got a custom dye order filled in between everything in August. 36 pounds to start. It was pretty gruelling tending the dyepots with the temps in the 80s and 90s. That sun behind the trees has been unmerciful for two weeks. I finally would wave to it as it set and say “bye bye”, won’t miss you!” 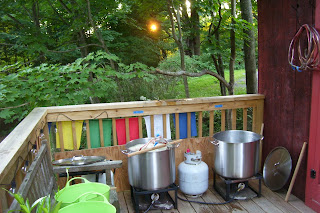 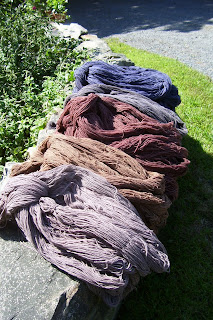 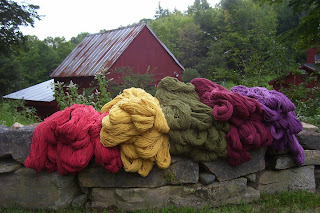 Jack keeps a game camera running in various locations and it caught this picture of a bear on the ridge. Since then there have been a few more pictures, one with a cub. That rounds out the population with deer, turkeys, fox, bobcat, bear, moose, raccon and a skunk! 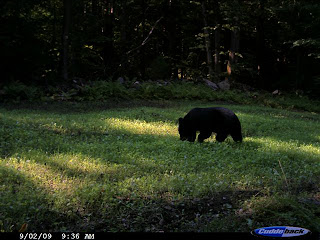 The garden didn’t wait for things to simmer down either. I froze pounds of beans, broccoli, peas, strawberries and just today peaches. We are digging potatoes as we go and the brussel sprouts are just about ready. 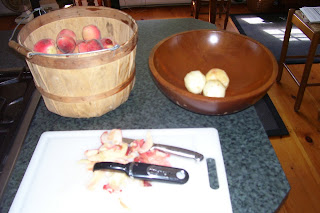 The hay is in, the garden is nearly in, the dyeing is caught up, although now I am preparing for the NY sheep show (Rhinebeck), the Earthues workshops are finished and were fabulous as usual, and the hint of fall is in the air!