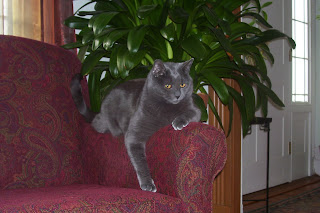 Just a couple of updates to old posts with dangling endings!

This is Webster. We finally found a name suitable to his personality. For Christmas I got a CD that I had on my wish list which had been hard to find. It is called “Soulville” by Ben Webster. It was recorded in 1957 and Ben Webster, internationally recognized as one of jazz’s elder statesmen, was a great tenor saxophonist and played with the Duke Ellington Orchestra for two decades prior to this album. He is joined on piano by Oscar Peterson, Herb Ellis on guitar, Ray Brown on bass and Stan Levey on drums; collectively known as the Ben Webster Quintet. Why all this background information? Because if you like jazz you need to own this CD. It is smooth, cool jazz.

Jack and I had been visiting friends on Christmas evening and coming home we listened to the CD for the first time. The full moon was on the rise, the air dry, the snow covered ground basking in moonlight as we took the country road home from the next town over. It was soooo beautiful and the music so fitting.

When we got home we put it on to finish listening to it and the cat joined us as we listened. He lay in front of the speakers under the dining room table and just grooved. Then he got up and did some zipping around. He liked it and so he was named at that very moment ~ Webster. The web man. The jazz man. Webster is going to be a good name and he already turns his head to it. The picture above is Webster today. He likes Shelley, the sheltie, a lot although they haven’t declared it so quite yet. He wants her to play hide and seek but she doesn’t get it so for now he talks to her and flirts. She was just outside the picture. He’s a cool cat.

The other update is regarding Daphne’s fleece that was lost at Rhinebeck this fall. I was waiting until the checks were mailed from the fleece sale committee before I would jump to conclusions on it’s disappearance. Well, my check came and it didn’t include the money for that fleece. The chairman of the committee called me a week later to say they never found the paperwork or the fleece so I should consider it stolen.

Nice, huh? Imagine, walking boldly and without conscience, out of the fleece sale barn with 7#s of fleece in a big see through plastic bag! My tags had to be torn off and hidden. I wonder if the person premeditated the caper. Or was it just on a whim? I work all year on those fleeces, changing , repairing and washing coats, keeping the sheep coats fitted properly, hiring a great shearer, then post shearing, cleaning, skirting and sorting, bagging and labeling the fleeces and Daphne’s was my prize fleece for the year. I saved it just for Rhinebeck. Well, as I said in the prior post I won’t be selling fleeces there ever again and I hope the grease never washes out of it for that shameless robber!